Accessing the Shut Down Windows Dialog from Windows 8 Start Menu

I've only just started using Windows 8 on my work PC and the first thing I miss is the simplicity of accessing Shut Down or Sleep from the Start Menu. For whatever reason (I'm leaning towards Microsoft wanting people to use hardware sleep controls) the Shut Down menu isn't as easily accessible as it used to be.

I've seen several blog posts on pinning shut down, restart, sleep, etc, shortcuts to the new Start Menu ("Start") but having separate icons for each function seems a bit of wasted screen estate. I then found someone suggesting pressing "Windows+D" to minimise to the desktop and then pressing "Alt+F4" to bring up the Shut Down dialog. 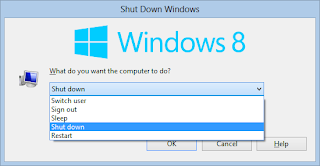 I figured that since the "Shut Down Windows" dialog was accessible in this manner then it should be accessible some other way. I played around with RunDLL32 commands to no avail but thought perhaps AutoIt could do something. A quick search and I came across the following four lines of code that do the trick http://www.autoitscript.com/forum/topic/95279-shutdowndialog-invoke-standard-shutdown-dialog-box

From this I've created a simple AutoIt app that will show the “Shut Down Windows” dialog:

To use, extract the .exe, save it somewhere and right-click “Pin to Start” 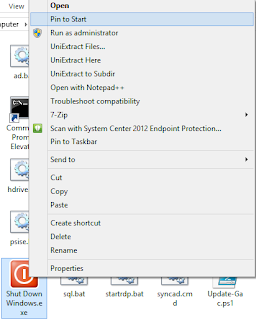